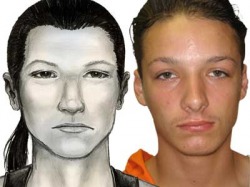 When we (AMW) first aired Jenna's case, a lot of tipsters called about a rape suspect in Mississippi.  Police in Ocean Springs, Miss. say their small town was gripped in panic for several days, when an attacker they knew as the "Baby-Face Rapist" sexually assaulted two women near the local Wal-Mart.  They called him the "Baby-Face Rapist" because of the young, feminine features his victims described.  Features like the composite sketch of the man Raleigh police are looking for questioning in the murder of Jenna Nielsen.

Still, because of the remarkable resemblance between Green and the Raleigh composite, plus the fact that Green was attacking women and had been in North Carolina around the time of Jenna's murder, investigators considered this a high priority lead.

We traveled with police to Mississippi to interview Green.  Green was adamant about the fact that he had nothing to do with Jenna's murder, and Raleigh cops believe he will be eliminated as a suspect.  Regardless, detectives on Jenna's case say it's just one step closer to finding the real killer, and they are very grateful for every single tip they receive.